Quarterly Results Are In 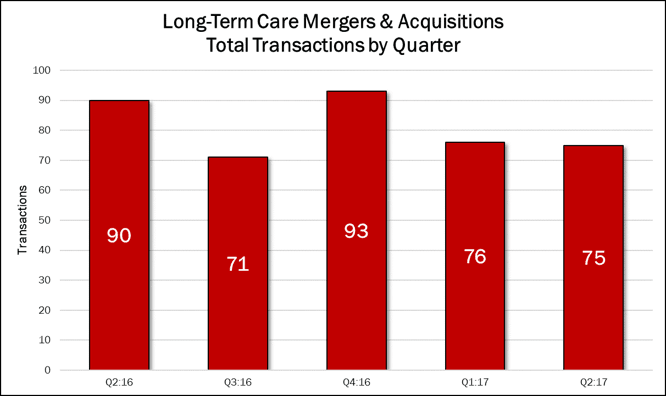 If you go by the number of transaction announced from April 1, 2017 to June 30, 2017, the second quarter may seem a bit slow, especially when compared to the recent quarterly highs of 90 deals in the second quarter of last year and of 93 deals in the fourth quarter of 2016. Keep in mind, these are preliminary numbers, as we hear of more transactions as the year goes on. M&A activity stayed virtually even in the second quarter, down 1% over the previous quarter, to 75 transactions. The quarter’s deal volume makes up 24% of the 315 deals announced within the past 12 months. Nothing too drastic there.

However, based on revealed prices, approximately $9.7 billion was committed to finance second quarter deals, an increase of 574% compared with the previous quarter and 299% higher than the same period in 2016. The second quarter accounted for 47% of the $20.6 billion spent in the last 12 months. Plus, the quarter included two billion-dollar-plus deals (Sabra Health Care REIT’s pending $4.0 billion acquisition of Care Capital Properties and Columbia Pacific Advisors’ $2.6 billion takeover of Hawthorn Retirement Group), and three other transactions valued at $700 million or over.

So, the big deals are back, and that activity may induce more transactions in the coming quarters. To read more about the other 12 healthcare sectors’ Q2 results, check out the Health Care M&A Quarterly Report, hitting desks next week.