As most of you know, skilled nursing prices plummeted 18% in 2017 to $81,350 per bed, according to the 23rd Edition of The Senior Care Acquisition Report. But with that decline, did the age of the properties sold throughout the year have a significant impact? 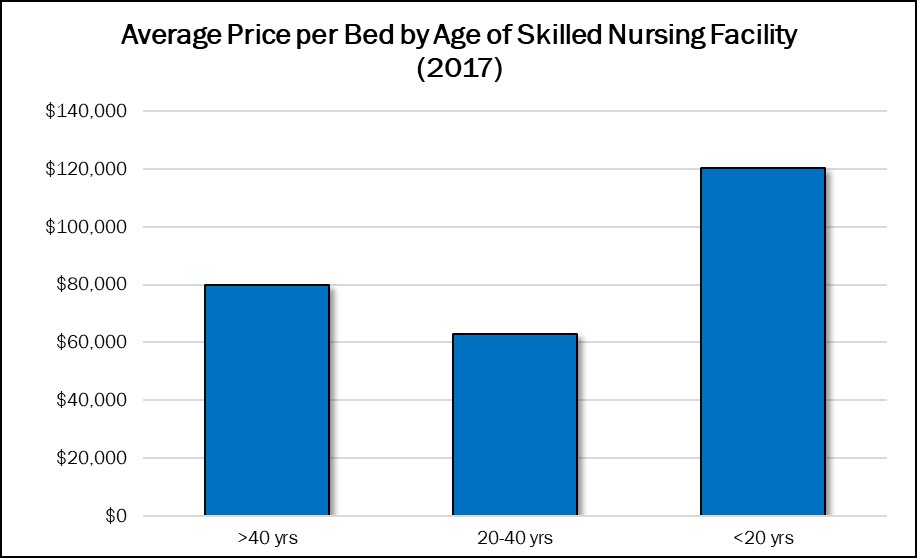 For obvious reasons, older skilled nursing facilities sell, on average, for a lower price than newer facilities. In 2016, there was a nearly perfect correlation between age and the price paid per bed. This did not occur in 2017, as the oldest group, those facilities more than 40 years old, sold for an average price per bed ($79,750) that was 26% higher than the next age group of 20 to 40 years ($63,000). Some of the older facilities could have had upgrades that we did not know about, or perhaps were in markets where their Medicare census should have been much higher, something the buyer recognized and paid up for. In addition, the middle age group could have some distressed properties that, regardless of the age, the price would be discounted because of the poor operations and minimal cash flow

Coincidentally, the newer properties, less than 20 years old, had an average price per bed of $120,350, almost identical to that in 2016 ($119,300). Most of the newer properties have a design layout and square footage per bed that tends to drive the pricing up. In addition, the newest ones are often not Medicaid certified, which can also help push prices up. To see over 70 other statistics on the skilled nursing and seniors housing M&A market in 2017, be sure to check out the Report, which will be published next week.